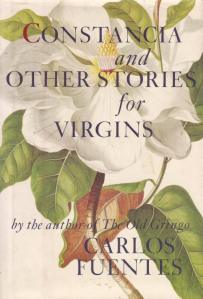 Carlos Fuentes (1928-2012) was one of the great mystical writers of the 20th Century, in that no matter how clearly he stated his theme or outlined his moral stance it is still well-nigh impossible to explain his vision. The intriguingly elaborate title Constancia and Other Stories for Virgins is a set of five novellas he had published in 1989. A translation by Thomas Christensen followed the year after and got little attention. Hardly surprising. These stories are confusing labyrinths, metaphysical mysteries for the soul and some are far more readable than others.

The novella form only adds to the level of difficulty. It is an ungainly object – padded at length compared to the short story but not long enough for the full involvement that a novel can offer. Most writers deal with these creations by either issuing one solo or by inserting it into a collection of shorter works, where it can act as a centerpiece. Putting five together, as Fuentes has done here, runs the risk of bogging the reader down. While Constancia would make a distinctive introduction for the novice, I believe it would be better approached by those already familiar with Fuentes and aware of his idiosyncrasies.

The stories are mysteries, more or less, borne of ghosts, parallels, surreal situations and secret tests of character. People are alive who should be dead, mannequins have souls, and each narrator is challenged by the most perplexing adversities (fear not, there is nothing Kafkaesque here; Fuentes was too original for that).

The lead-off story, ‘Constancia,’ is narrated by a lethargic and uncharismatic aging intellectual. The Russians make that exciting – Fuentes makes everything around it exciting. Consequently, the ramblings of Dr. Whitby Hull about his lusty but troubled marriage to a pious, uneducated Spanish woman and his ambivalent sense of white guilt as a white man in Savannah, Georgia is not terribly compelling. Luckily, this is only the entryway to a larger story as Fuentes weaves the deep voice of history’s pain into the narrative through the collective memory of refugees. Whitby’s privileged worries give over to the mysterious ailment of Constancia, setting him in pursuit of her past. The plot only becomes more dreamlike as the layers of history’s carnage unfold. It also includes one of the most genuinely redemptive conclusions for its main character that I have come across.

‘La Desdichada’ is considerably more fun. Two young men, aspiring writers in 1930s Mexico City, become captivated by a sad-eyed store mannequin and bring her into their apartment. Soon enough she creates a rift between them. It lacks the perverse horror required to rival Felisberto Hernández’ ‘The Daisy Dolls’ but it’s not exactly Lars and the Real Girl either. It is, however, a great space for Fuentes to show off his skills as a decadent writer:

We took taxi after taxi, the four of us squeezed in together, breathing the intense perfume of those strange creatures. It was the last night of the city we had known. The ball at San Carlos, where they took us that night (the perfumed couple, Pierrot and Columbine) was the annual saturnalia of the university students, who cast aside the medieval prohibitions of the Royal, Holy University of Mexico amid the Neoclassicism of the eighteenth-century palace’s stone staircases and columns: disguises, drinks, abandon, the always threatening movement of the crowd carried away by the dance, the drunkenness, the sensuality on display, the lights like waves; who was going to dance with Ambar, who with Estrella: which was the man, which was the woman, what would our hands tell us when we danced first with Columbine, then with Pierrot?

It is a compelling story with a vibrant cast and a subtle, phantasmagoric ending. Of all the stories, it is perhaps the most ambiguous in its resolution – though it contains only a hint of surrealism, it is never made clear what exactly the doll La Desdichada was nor what she expected of the boys.

Story No. 3, ‘The Prisoner of Las Lomas,’ is the least stylistically demanding of the set. The narrator, a lawyer and general snake in the grass, makes a gregarious and straightforward storyteller. The action develops at a pleasant clip and concepts such as the value of information, the invisibility of servants and the seclusion (invisibility) of the elite are all wrapped up in a story of blackmail, murder and the mob. If you’re looking for an easy way into the book, ‘The Prisoner of Las Lomas’ is your best bet.

The snag comes with ‘Viva Mi Fama’ – one of the longest stories and the most surreal of the set. People who think surrealism works best in small doses (like me) will find this very distracting. The plot follows an actress, a bullfighter and Francisco Goya in a love triangle of sorts, culminating in the luckless reincarnation of the bullfighter attempting to retrieve his former glory. Ceaseless romanticizing and sexualizing of bullfighting ensues. Culture clash is expected when reading world literature, but like most decadent writers, Fuentes didn’t know when to quit and the story is pretty much the definition of overkill. Of course, if you’re a fan of the word-drunk decadence movement, you’ll probably enjoy the whole thing far more than me. It is a good example of Fuentes’ delight in language, even if it does veer into self-indulgent stylistics.

Though Goya appears as a character in ‘Viva Mi Fama’ he’s not used half as well there as he was in the beginning of ‘Constancia,’ when Whitby Hull wanted to tell his wife that it is reason that never sleeps which produces monsters. A telling inversion. “Reason” has absolutely no place in these tales, any more than it had a place in the dreamscape of Aura.

The final of the five Stories for Virgins is a return to form. There is a strong hallucinogenic element in ‘Reasonable People’ but it doesn’t overwhelm the central plot, which involves miracles, incest and some luminous architectural discussion. Like Victor Hugo, he attempts to capture the soul of a people and their history in the form and substance of their architecture, described in a rapturous and enthusiastic prose: The approach to the Lincoln had become an obstacle course, thanks to the never-ending construction on Revillagigedo, Luis Moya, Marroquí, and Artículo 123, the streets around it. The Federal Attorney’s Office, the site of the old Naval Ministry, several popular movie houses, and a real jungle of businesses, garages, hardware stores, and used-car lots made that part of the city look like a metallic mountain range: twisted, tortured, rough, rusty; several stages in the life of steel were exposed there, like the entrails of an iron-age animal – literal, emblematic – they were bursting out, exposing themselves and revealing their age, the age of the beast, the geology of the city.

‘Reasonable People’ is marred only by a bait and switch conclusion. There is some excellent imagery during the hallucinogenic portion, where one of the architects discovers a windowless house leftover from the old City. Mexican houses are all blind on the outside; the blank walls around their entrances tell us only that these houses look inward, to the patios, the gardens, the fountains, the porticoes that are their true face. There he encounters a group of mutilated nuns and a corrupted semblance of the Virgin and Child. It does feel a little padded, but is more interesting than not.

As should be apparent, the curious title of the collection is an emblem of its Catholic focus. The Virgin is mentioned and mused upon in every one of these novellas. Being knowledgeable in Catholicism would likely help a reader to appreciate the imagery, and doubtless much has escaped me. Constancia is a reading experience where the more knowledge you have, the better. This is challenging material for the brain, so you’d better be prepared for that. Don’t expect another Aura. This book is not half so accessible, though it has its own rewards – and I thoroughly recommend ‘La Desdichada.’ 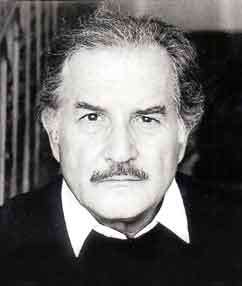 For questions, comments, appreciation, etc. I am available at rahina.mcwethy(at)gmail dot com